A bowl of chili con carne with beans and tortilla chips

Chili con carne (in America shortened to chili) is a spicy stew-like dish, the essential ingredients of which are beef, pork, venison, or other mature meat, and chili peppers. Variations, either geographic or by personal preference, include the addition of tomatoes, onions, beans, and other ingredients. (Brown sugar is often a favorite condiment). There are also many versions of vegetarian chili, also known as chili sin carne, made without meat (sometimes with a meat substitute). The name "chili con carne" is a slight corruption of the Spanish chile con carne, "chili with meat". Chili con carne is the official dish of the U.S. state of Texas.

Texas chilies are generally beef-based, use dried red chili peppers and are therefore red in color. They contain no beans and little or no vegetables other than the chili peppers. 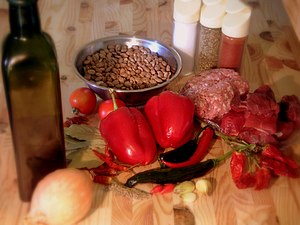 Original Texas-Style Chili
This recipe contains no vegetables except chilies which have been prepared by being boiled, peeled, and chopped.

Jailhouse Chili
In the early part of the 20th century, those likely to regularly spend time in local detention facilities in the American Southwest were said to rate the accommodations by the quality of the chili they were served. This became a matter of local pride and competition with other communities. This is a modern version, as served in the Texas prison system.

Pedernales River Chili
This chili was the favorite of U.S. President Lyndon Johnson and is named after the location of his Texas Hill Country ranch. Johnson preferred his chili made with venison. [1]

Texas Easy Chili
This recipe is a chili powder- and tomato juice-based sauce combined with cubed or ground beef.

The official state vegetable of New Mexico is the chili pepper and the official state question is "Red or green?" This refers to the decision New Mexican chili devotees must regularly make, and which engenders frequent discussion and argument. The red chili is simply a riper form of the green chili; the former is cooked in its dried form and the latter is used fresh from the field, with significant differences in results. For those who simply cannot decide, the standard reply is "Christmas", meaning a portion of each. New Mexico chilies are more commonly based on pork, and include more vegetables than Texas style chilies.

Green Chili Stew
This recipe is a New Mexican dish that is known as the beef stew of New Mexico. It is usually served with tortillas or sopapillas.

Other meat based chili recipes

Chili con Bambi
Another venison based chili con carne. Intended for slow cooking so can use very tough meat.

White Chili
Instead of a tomato-based sauce and red meat (beef), great northern beans and chicken breast meat can be substituted. The resulting dish appears white when cooked, and has more of an alkali bean taste, instead of the acidic taste of traditional chili.

Pepper chili
Chili made with bell-peppers

Vegetarian chilis acquired wide popularity in the U.S. during the 1960s and 1970s with the rise of the vegetarian philosophy, and is also popular with those on diets which restrict red meat. To make a chili vegetarian, the meat is left out of the recipe or replaced with a meat analogue such as textured vegetable protein or tofu. Some people consider vegetarian chili to be a spicy vegetable stew, and not true chili.

Vegan Chili
This is a kind of chili that needs no meat (and uses no ersatz meat). Molasses gives this chili a somewhat Louisiana flavor. 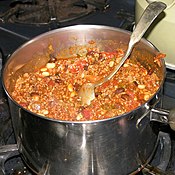 A pot of chili with beans.

Several beverages are commonly used to accompany a bowl of chili, including ice-cold beer or cold milk to moderate the impact of the chilies on the throat. Saltine crackers, broken up and scattered on top, are common in chili parlors. Similarly, commercial corn chips can be added as a topping, producing something akin to Frito Pie. Jalapeño cornbread, rolled-up corn tortillas, and pork tamales also are popular for dunking. Peanut butter sandwiches or peanut butter on saltine crackers served on the side can also accompany chili. In Missouri, a small portion of pickle juice is often poured into the bowl of chili. In Indiana, some heap coleslaw in their bowl of chili before eating.

Pinto beans (frijoles), a staple of Tex-Mex cooking, have long been associated with chili and the question of whether beans "belong" in chili has been a matter of contention among chili cooks for an equally long time. It is likely that in many poorer areas of San Antonio and other places associated with the origins of chili, beans were used rather than meat, or in addition to meat, due to poverty. In that regard, it has been suggested by some chili aficionados that there were probably two chili type made in the world, depending on what could be afforded and how frugal the cook was.

As chili spread east into areas where beef was more expensive (beef was plentiful and cheap in San Antonio and other cattle towns), chili with pinto or other beans became more prevalent. In some eastern areas, this dish is referred to as "chili beans" while the term "chili" is reserved for the all-meat dish. Other changes included the adding of other vegetables. Tomatoes are almost always used, bell peppers are common, and even celery appears in recipes. Many easterners are just as adamant about the inclusion of beans in their chili for an authentic flavor as Texans are about their exclusion.

Most commercially prepared canned chili includes beans. Commercial chili prepared without beans is usually called "chili no beans". If you substitute chunks of fresh mushrooms for the beans, you will cut the calorie content of your favorite chili recipe by at least a third, without sacrificing taste. The bland white button mushroom will soak up the flavors of the chilies, tomatoes, chili powder, etc, while helping the chili retain its consistency.

Many chili experts believe, however, that beans and chili should always be cooked separately and served on the side. It is then up to the consumer to stir his preferred quantity of beans into his own bowl. Some cooks prefer black beans, black-eyed peas, or kidney beans instead of pinto beans.

A popular saying among chili purists is "If you know beans about chili, you know chili ain't got no beans".

Another ingredient considered anywhere from required to sacrilegious is tomatoes. Wick Fowler, north Texas newspaperman and inventor of "Two-Alarm Chili" (which he later marketed as a "kit" of spices), insisted on adding tomato sauce to his chili, one 15-oz. can per three pounds of meat. He also believed that chili should never be eaten newly-cooked but refrigerated overnight to seal in the flavor. Matt Weinstock, a Los Angeles newspaper columnist, once remarked that Fowler's chili "was reputed to open eighteen sinus cavities unknown to the medical profession". [Tolbert, A Bowl of Red]

In Southeast Texas people eat chili over white rice, much like one would eat gumbo, this is due to the proximity to Louisiana. This is also common in the United Kingdom.