A typical portion is two fluid ounces, requiring the juicing of 1/3 to 1 square foot of wheat grass. The juice has a pungent, sweet odor/taste which is an acquired taste. It may be drunk straight, or mixed with other juices, such as carrot or apple.

Wheatgrass juice should always be consumed immediately after juicing. 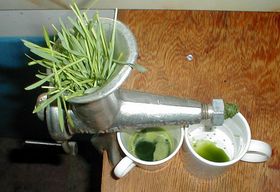