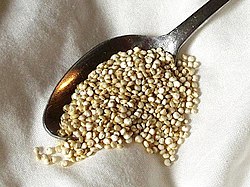 Wikipedia Article About Quinoa on Wikipedia

Quinoa (pronunced keen-wah) is a species of goosefoot (Chenopodium quinoa Wild) grown as a crop primarily for its edible seeds. It is not a true cereal as it is not a grass. Quinoa originated in the Andean region of South America, where it has been an important food for 6,000 years. Quinoa is generally undemanding and altitude-hardy, so it can be easily cultivated in the Andes up to about 4,000 meters. Even so, it grows best in well-drained soils and requires a relatively long growing season.

Quinoa was of great nutritional importance in pre-Columbian Andean civilizations, being secondary only to the potato, and followed in third place by maize. In contemporary times this crop has come to be highly appreciated for its nutritional value, as its protein content (12%–18%) is very high. Unlike wheat or rice, quinoa contains a balanced set of essential amino acids for humans, making it an unusually complete foodstuff. This means it takes less quinoa protein to meet one's needs than wheat protein. It is a good source of dietary fiber and phosphorus and is high in magnesium and iron. Quinoa is gluten free and considered easy to digest.