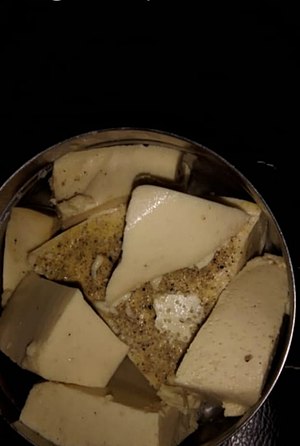 Paneer (in Persian پنير sometimes spelled Panir or Paner), is the Persian word for "cheese". It is an unaged, acid-set, non-melting Farmer cheese that is similar to acid-set fresh mozzarella and queso blanco, except that it does not have salt added. Like mozzarella, Bengali paneer is beaten or kneaded. However, other types of paneer are simply pressed. Paneer is the only type of cheese indigenous to the Indian subcontinent, and is most commonly used in Middle Eastern and South Asian cuisine. Paneer is a primary source of protein for Buddhists (typically those of South Asian origin) who adhere to vegetarian but not to vegan diets.

Paneer is known in North India and Pakistan by the same name; however, in Bengal it is known by the name "Chhena" and in south India, by names derived from "Panneer" and "Channa" (not to be confused with Chana, the Bengali name for the chick pea).

Paneer is made from whole cow's or buffalo's milk and curdled with lemon or lime juice or with whey from a previous batch. It also known as cottage cheese.