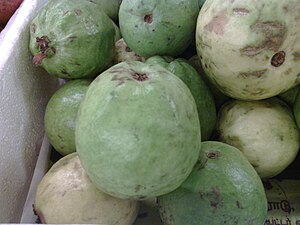 Wikipedia Article About Seakale on Wikipedia

Guava (from Spanish Guayaba; Goiaba in Portuguese) is a genus of about 100 species of tropical shrubs and small trees in the myrtle family Myrtaceae, native to the Caribbean, Central America and northern South America. The leaves are opposite, simple, elliptic to ovate, 5-15 cm long. The flowers are white, with five petals and numerous stamens. Psidium species are used as food plants by the larvae of some Lepidoptera species including Eupseudosoma aberrans, Snowy Eupseudosoma and Hypercompe icasia.

Guava is an oval shaped fruit that varies in size from a small egg to a medium apple. The thin skin may be yellow, red, purple or nearly black and the flesh ranges from a pale yellow to a bright red. Guava is sweet with a slight tart aftertaste. Its texture is firm; similar to an apple. Guava is native to South America, but is now commonly grown in California, Florida and Hawaii. It is also known as a Bangkok Apple or Guayaba.

Select fruit that gives to gentle pressure and is unblemished. Fresh guavas are often only available in the region near where they are grown, but may be ordered by mail. Canned guava products are available nationwide throughout the year in larger supermarkets.

The entire guava is edible. The rind and small seeds inside, along with the creamy flesh are often used in making jellies, preserves, and sauce. To be eaten raw, guava needs to be very ripe. Guava is typically sliced lengthwise into 5 or 6 slices and seeds discarded