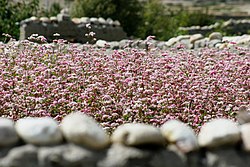 Wikipedia Article About Buckwheat on Wikipedia

Common Buckwheat (Fagopyrum esculentum) is a plant in the genus Fagopyrum (sometimes merged into genus Polygonum) in the family Polygonaceae. With its congenor the Tartar Buckwheat, it is often counted as a cereal, though unlike most cereals the buckwheats are not true grasses. Buckwheat is thus not related to true wheat. Buckwheat is most likely descended from wild buckwheat, though it does not share its vine-like growth habit.

Common buckwheat was domesticated and first cultivated in southwest Asia, possibly around 6000 BC, and from there spread westwards to Europe and eastwards to Central Asia and then into Tibet and China. It is documented in Europe in the Balkans by at least the Middle Neolithic (circa 4000 BC) and the oldest known remains in China so far date to circa 2600 BC. However, buckwheat pollen is present in Japan as early as 4000 BC suggesting either that (i) domestication of this plant occurred earlier than has been documented archaeologically; (ii) it spread more rapidly than previously acknowledged, or; (iii) there were two or more domestication events. It is the world's highest elevation domesticate, being cultivated in Yunnan on the edge of the Tibetan Plateau or on the Plateau itself.