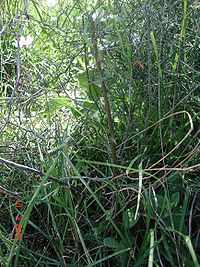 Wikipedia Article About Asparagus on Wikipedia

Asparagus are the vegetable obtained from one species within the genus Asparagus, specifically the young shoots of Asparagus officinalis. It has been used from very early times as a culinary vegetable, owing to its delicate flavour and diuretic properties. There is a recipe for cooking asparagus in the oldest surviving book of recipes, Apicius's 3rd century CE De re coquinaria, Book III.

White asparagus is cultivated by denying the plants light while they are being grown.

The name asparagus comes from classical Latin, but the plant was once known in English as sperage from medieval Latin sparagus. The original Latin name has now supplanted the English word. Asparagus was also corrupted in some places to "sparrow grass"; indeed, John Walker stated in 1791 that "Sparrow-grass is so general that asparagus has an air of stiffness and pedantry." In their simplest form, the shoots are boiled or steamed until tender and served with a light sauce like hollandaise or melted butter or a drizzle of olive oil with a dusting of Parmesan cheese. A refinement is to tie the shoots into sheaves and stand them so that the lower part of the stalks are boiled, while the more tender heads are steamed. Tall cylindrical asparagus cooking pots have liners with handles and perforated bases to make this process foolproof.

Unlike most vegetables, where the smaller and thinner are the more tender, thick asparagus stalks have more tender volume to the proportion of skin. When asparagus have been too long in the market, the cut ends will have dried and gone slightly concave. The best asparagus are picked and washed while the water comes to the boil. Fastidious cooks scrape asparagus stalks with a vegetable peeler, stroking away from the head, and refresh them in ice-cold water before steaming them; the peel is often added back to the cooking water and removed only after the asparagus is done, this is supposed to prevent diluting the flavor. Small or full-sized stalks can be made into asparagus soup. Cantonese restaurants in the United States often serve asparagus stir-fried with chicken, shrimp, or beef. Asparagus is one of few foods which is considered acceptable to eat with the hands in polite company, although this is more common in Europe.

Some of the constituents of asparagus are metabolised and excreted in the urine, giving it a distinctive, mildly unpleasant odor. The smell is caused by various sulfur-containing degradation products (e.g. thiols and thioesters).Studies showed that about 40% of the test subjects displayed this characteristic smell; and a similar percentage of people are able to smell the odor once it is produced. There does not seem to be any correlation between peoples' production and detection of the smell.

Because of its phallic shape, Asparagus was believed to have aphrodisiac effects. This has never been proven.

The amino acid asparagine gets its name from asparagus, the asparagus plant being rich in this compound.

This vegetable is sometimes referred to as the aristocrat of vegetables. Many Greeks and Romans not only appreciate asparagus for its taste but also believe it possesses medicinal properties from alleviating toothaches to preventing bee stings. Such things are mythical, but asparagus does contain a good supply of vitamins and minerals. Asparagus appears in markets as early as February, but the peak of this crop's season is in April and May.

Asparagus can be found in green and white varieties. Green asparagus is the most common in the United States, while the white is more popular in Europe. White asparagus is grown under the soil. This does not allow the sun's rays to penetrate the plant, and therefore it does not produce the chlorophyll necessary to produce the green color. When eaten raw, white asparagus has a sweet, nutty taste.

Choose firm yet tender stalks. For the green variety, choose stalks with deep green or purplish tips that are closed and compact. Avoid excessively sandy spears. Stalks with a narrow diameter are more tender than thick ones.

Store stalks, with bottoms wrapped in a damp paper towel, in the crisper section of the refrigerator; if you don't have a crisper, put them in plastic bags and place them in the coldest part of the refrigerator. It is best to eat asparagus the day it is purchased, because the flavor lessens with each passing day.

Wash asparagus in cool running water. Snap off tough ends at their natural breaking point. Before cooking white asparagus, it first must be peeled so that no skin remains. This can be done using a potato peeler. White asparagus needs to be cooked until completely tender, while the green variety can be stir-fried, lightly steamed or cooked in the microwave.