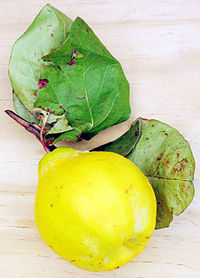 Wikipedia Article About Quince on Wikipedia The Quince Cydonia oblonga is the sole member of the genus Cydonia and native to warm-temperate southwest Asia in the Caucasus region. It is a small deciduous tree, growing 5-8 m tall and 4-6 m wide, related to apples and pears, and like them has a pome fruit, which is bright golden yellow when mature, pear-shaped, 7-12 cm long and 6-9 cm broad.

The immature fruit are green, with dense grey-white pubescence which mostly (but not all) rubs off before maturity in late autumn when the fruit changes colour to yellow with hard flesh that is strongly perfumed. The leaves are alternately arranged, simple, 6-11 cm long, with an entire margin and densely pubescent with fine white hairs. The flowers, produced in spring after the leaves, are white or pink, 5 cm across, with five petals.

Four other species previously included in the genus Cydonia are now treated in separate genera. These are the Chinese Quince Pseudocydonia sinensis, a native of China, and the three flowering quinces of eastern Asia in the genus Chaenomeles. Another unrelated fruit, the Bael, is sometimes called the "Bengal Quince".

One of the most important elements that define any fruit preparation method today involves the cooking time. The faster you can cook a certain fruit, the more popular it is, it seems. Quinces are mostly used for filling for cakes and pastry items, but there are diverse ways of preparing them. Compotes using this fruit are often very popular in many cuisines and the nutritious values of Quinces are often saved through smart preservation techniques. While in most cases, preparing Quinces for a dessert or a drink will not take more than a few minutes, you can also boil them and use them as such in various main meals and desserts. When boiling, you should also take into consideration the particular type of Quince you are using, as some are firmer than others and take longer to prepare.

There are so many ways in which you can sue Quinces in your culinary arts. Quince preparation methods and dish types differ from one region to another, and many people are experiencing this fruit in a totally different way than what they were used to when they taste a national cuisine dish belonging to another country. Most of the dishes containing Quinces are desserts and snacks, but some countries also use them in combination with salty items such as meat or Fruits. Quinces are widely appreciated in many national cuisines, and this is clearly seen in the diversity of methods that chefs all over the world created for their preparation.