Difference between revisions of "Pomegranate" 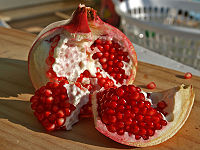 Wikipedia Article About Pomegranate on Wikipedia

The Pomegranate, Punica granatum, is a species of fruit-bearing deciduous shrub or small tree growing to 5-8 m tall. The pomegranate is believed to have originated in the area from eastern Iran to northern India, but its true native range is not accurately known because of its extensive cultivation.

The leaves are opposite or sub-opposite, glossy, narrow oblong, entire, 3-7 cm long and 2 cm broad. The flowers are bright red, 3 cm diameter, with five petals (often more on cultivated plants). The fruit is between an orange and a grapefruit in size, 7-12 cm diameter with a rounded hexagonal shape, has a thick reddish skin and many seeds. The edible parts are the seeds and the brilliant red seed pulp surrounding them .

The only other species in the genus, Socotra Pomegranate Punica protopunica, is endemic on the island of Socotra. It differs in having pink (not red) flowers and smaller, less sweet fruit.

Although previously treated in its own family Punicaceae, recent phylogenetic studies have shown that Punica belongs in the family Lythraceae and it is classified in that family by the Angiosperm Phylogeny Group.

Pomegranates are drought tolerant, and can be grown in dry areas with either a Mediterranean winter rainfall climate or in summer rainfall climates. In wetter areas, they are prone to root decay from fungal diseases. They are tolerant of moderate frost, down to about -10 °C.

The fruit is typically in season from September to November.

Cities of Kashan, Saveh and Yazd all in Iran are known to cultivate the best kinds of Pomegranate in the world.