Originally from southern India, Europe had no spice to match its power, so it was exceptionally expensive in ancient times. It was considered on par with meat and medicine in its importance, and an ounce of pepper was worth an ounce of gold. Peppers generally used include black, white, and green. Used in both soups and dishes.

Peppercorns are the berries from a vine used whole or ground as a spice. Black peppercorns, which have the most pungent flavor, are picked slightly underripe, and their hulls oxidize as they dry. Milder white peppercorns are fully ripened berries, husked before drying. Sharp-tasting unripened green peppercorns are sold in water, pickled in brine, or dried. Brine-packed peppercorns should be rinsed before using. Peppercorns can be ground in a pepper mill or crushed coarsely with a mortar and pestle.

A spice that is derived berries grown on pepper plants, such as the Piper nigrum, Piper longum or the Piper retrofractum plants. Berries from the Piper nigrum are referred to as peppercorns, which are small round hardened black berries. The berries are harvested when they are not quite ripe and are dried until the skin shrivels and the berry hardens. Black peppercorns can be sold whole and then ground in a pepper mill as needed. Black pepper is also sold in a ground form, but it can lose much of its flavor if the container is kept for long periods. Whole peppercorns that are ground as needed retain the most flavor. Black pepper, which is used in many different food dishes and cuisines, is perhaps the most useful and popular of all spices. 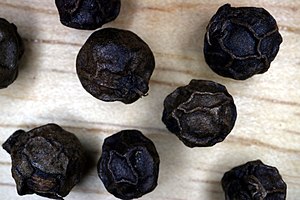 Native to Asia, the berries from the Piper longum or the Piper retrofractum plants are clustered on short narrow stems that have a rough outer skin with an appearance very similar to a elongated, miniature pine cone prior to opening. The berry of this pepper can be broken into smaller bits to be ground into a spice providing a sweet and spicy tasting flavor. More common in Middle Eastern cooking, long pepper is often used with other spices to flavor foods such as spicy cheeses, stews and lamb dishes.

There are a variety of different pepper blends and grinds that are produced for use in recipes to create combinations of flavors and textures to enhance the foods being prepared. As an example pepper blends which contain several varieties of peppercorn berries picked at different times, dried by using different drying processes resulting in distinctively different flavors, and mixed together to create a blend of three or four peppercorns. Typical blends may include black, white and green or adding red as a fourth peppercorn. Pepper blends may also refer to a blend of pepper and herbs or peppercorns and sweet bell peppers combined into a blend and referred to as a "seasoned pepper blend." Restaurant black pepper is a variety of pepper that has a coarser texture than a traditional ground pepper, providing larger pieces of ground pepper, eliminating finer granules and pepper dust that may require more substance to be tasted. Restaurant black pepper can be used as a topping for salads or side dishes such as vegetables, while also being served on pasta, meats and poultry.

A pepper mill will typically grind peppercorns or broken pieces of long peppers into 3 basic grinds: fine, medium and coarse grind. A fine grind is best used for salad dressings, pureés, egg dishes, potato salads, and foods that do not want the larger, dark pepper flakes to be noticeable. A medium grind is a general purpose grind to season meats, fish, shellfish, poultry, soups, stews, pasta, and miscellaneous savory foods. Coarse ground pepper is best suited for marinades, hearty meats, salads with thick or rich dressings such as Ceasar salad, and any dishes in which the pepper flavor is to be noticed.