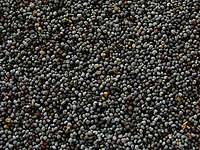 Tiny, bluish-black, round seeds, found in the poppy flower, which have a nutty-like flavor. These small, dried, bluish-gray seeds of the poppy plant measure less than 1/16 inch in diameter-it takes about 900,000 of them to equal a pound. Poppy seeds have a crunchy texture and a nutty flavor. They're used as a filling in various cakes, pastries and coffeecakes, as a topping for myriad baked goods, in salad dressings and in a variety of cooked dishes-particularly those originating in central Europe, the Middle East and India. Poppy seeds can be purchased whole or ground in most supermarkets. There are also beige and brown poppy seeds, which are more commonly available in Asian or Middle Eastern markets. Because of their high oil content, all poppy seeds are prone to rancidity. They should therefore be stored, airtight, in the refrigerator for up to 6 months. Toasting augments the flavor of poppy seed. They add crunch and a sweet flavor to cookies, muffins and other baked goods.

Poppy seed is an oilseed obtained from the opium poppy (Papaver somniferum). The tiny kidney-shaped seeds have been harvested from dried seed pods by various civilizations for thousands of years. The seeds are used, whole or ground, as an ingredient in many foods, and they are pressed to yield poppyseed oil. Poppy seeds are used around the world in various cuisines.

Buy poppy seeds in bulk from a purveyor with a steady turnover, such as a central European delicatessen or Middle East or Indian grocer (poppy seeds are used in the cuisines of the East, too). Poppy seeds in tiny jars from the supermarket are likely to be prohibitively expensive and rancid. Store poppy seeds in an airtight container in the refrigerator or freeze them for up to 6 months. Always give poppy seeds a good sniff before using to check for any hint of rancidity.

For use as a filling in pastries, poppy seeds usually are ground to a paste. To the paste other ingredients are added: usually sugar or honey, milk and maybe butter, and lemon zest and maybe juice.

Poppy seeds can be ground using a generic tool such as a mortar and pestle or a small domestic type electric blade grinder, or a special purpose poppy seed grinder. A poppy seed grinder (mill) is a type of burr grinder with a set aperture that is too narrow for intact poppy seeds to pass through. A burr grinder produces a more uniform and less oily paste than these other tools.

Poppy seed paste is available commercially, in cans. Poppy seeds are very high in oil, so commercial pastes normally contain sugar, water, and an emulsifier such as soy lecithin to keep the paste from separating. Commercial pastes also contain food preservatives to keep them from becoming rancid.