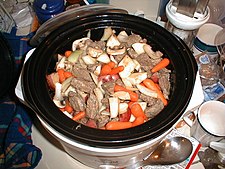 A stew is a combination of solid food ingredients that have been cooked in liquid and served in the resultant gravy. Ingredients in a stew can include any combination of vegetables (such as carrots, potatoes, beans, peppers and tomatoes, etc.), meat, especially tougher meats suitable for slow-cooking, such as beef. Poultry, sausages, and seafood are also used. While water can be used as the stew-cooking liquid, wine, stock, and beer are also common. Seasoning and flavourings may also be added. Stews are typically cooked at a relatively low temperature (simmered, not boiled), allowing flavors to mingle.