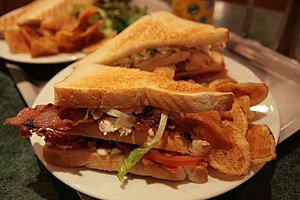 A double decker toasted sandwich containing bacon, tomato, lettuce and egg served with crisps on a white porcelain plate. This sandwich very likely has mayonnaise spread on it instead of or in addition to butter. A similar sandwich is shown in the background but this has salad instead of crisps. Both plates are on a tray, which is on a grey marble or marble-effect counter top.

A sandwich is a light snack prepared by placing different kinds of foods between two pieces of bread. The pieces of bread in a sandwich are referred to as slices or sheets of bread. The snack is thought to have been made first for the Earl of Sandwich, hence the name. Many people enjoy the sandwich as it is easy and quick to make in a hurry. Also, the sandwich can be easily eaten with one hand without utensils which allows consumers to have a hand free to do other things. Some people prefer to eat a sandwich with both hands.

In many countries, children eat sandwiches for lunch at school. The sandwiches are put in a lunchbox and often wrapped in cling film to keep them fresh.