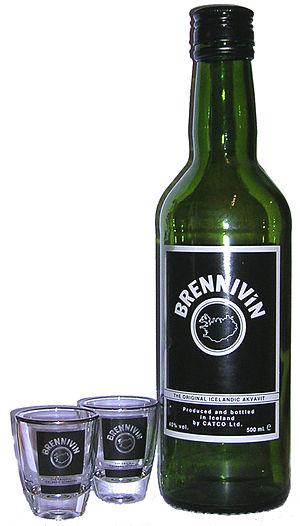 Brennivín (BRECH-nih-veen)(see also Brännvin) is an Icelandic schnapps, considered the country's signature alcoholic beverage. It is made from fermented potato pulp, and flavoured with caraway seeds. It is sometimes called svarti dauði ("black death").

At times it is drunk as a "chaser" after sampling "hákarl", which consists of putrefied shark meat, to mask the meat's taste. The word brennivín literally translates into English as 'burning wine', and comes from the same root as brandy, namely brandewijn which has its roots in the Dutch language (also compare German Branntwein).

Despite its unofficial status as national beverage and a traditional drink for the mid-winter feast of Þorrablót, many Icelanders do not regularly drink it. The drink has a strong taste and high alcohol content (37.5% ABV), and carries an equivocal reputation: despite the fact that Iceland levies huge taxes on most alcoholic beverages, brennivín is actually one of the moderately priced liquors available in the national alcohol store, Vínbúð, and is thus often associated with alcoholics. It's very difficult to find in the United States.

Brennivín is similar to Scandinavian Akvavit, especially the Danish variety, called brændevin. In Swedish it is called brännvin, and in Norwegian brennevin. The steeping of herbs in alcohol to create Schnapps is a long-held folk tradition in all Scandinavian countries. Brennivín is featured in the Halldor Laxness novel Iceland's Bell.