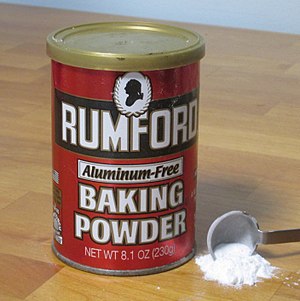 Baking powder is a dry chemical leavening agent used in baking. There are several formulations; all contain an alkali, typically sodium bicarbonate (baking soda), and an acid in the form of salt crystals, together with starch to keep it dry. When dissolved in water the acid and alkali react and emit carbon dioxide gas, which expands existing bubbles to leaven the mixture. Most modern baking powders are double acting, that is, they contain two acid salts, one which reacts at room temperature, producing a rise as soon as the dough or batter is prepared, and another which reacts at a higher temperature, causing a further rise during baking. Baking powders that contain only the low-temperature acid salts are called single acting. Most recipes call for a mixing procedure that is designed to introduce many tiny air bubbles, for example, "cream the butter and sugar", which the leavening gas from baking powder will expand.

A leavening agent of which the most common is double-acting baking powder, called so because it reacts first with liquids and secondly, with the heat during baking.

A good substitute for 1 teaspoon of baking powder is ¼ teaspoon baking soda plus ½ teaspoon cream of tartar. Periodically, check the expiration date on your can as baking powder loses its leavening power over time.

Another recipe calls for baking soda, combined with an equal measure of cornstarch and twice as much cream of tartar to replace baking powder.