Sauces are thickened liquid additions to a recipe, used to enhance the flavor or appearance, or to add moisture. In the 1800s, the French chefs Antonin Carême and Auguste Escoffier developed a systematic categorization of sauces, based on five "mother sauces". All sauces were considered to be a variation of one of these sauces. As other cuisines and ingredients have become more common to world cuisine, the number of mother sauces and sauce families has expanded slightly, but most sauces can be seen as a variation or adaptation of a few basics.

The sauces below are grouped by their family. The first five groups are the traditional sauce families, with the modern additions following. Except for the Dessert family, the top sauce in each family is that family's "mother sauce". Many of the mother sauces use a roux as the thickening agent. Roux itself is not really a sauce, as it would not be used alone. 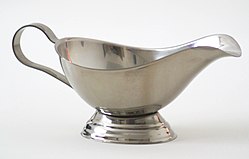