These cookies can be considered gingerbread cookies, and originally were named as such. They resemble the molasses cookies made by Archway; they use relatively little ginger and are thus not as spicy hot as gingerbread cookies from many other recipes. They are usually somewhat soft and not at all gooey, being halfway between crumbly and chewy. They are generally not crisp, but can be slightly crisp if thoroughly cooked. The recipe works for both drop cookies and rolled cookies, with a bit of adjustment to the amount of flour.

The known history of this recipe starts from eavesdropping on a party-line telephone during the early 1900s. The age of this recipe appears to explain many odd features. At the time, baking powder did not exist. Thus this recipe uses baking soda, with sour milk (now created via vinegar, so don't panic) as the acid. Ginger would have been expensive. The recipe originally called for an undefined amount of flour that turned out to be around 8 cups (1/2 gallon), which would feed a family of a dozen or so. The recipe has been cut in half for the benefit of less-productive parents. 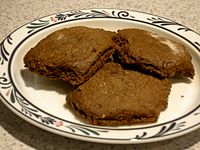 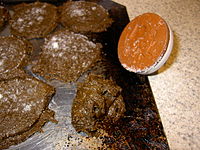 In progress: the drop variety, with about 3c flour total, being pressed with a sugar-covered clay stamp.

Butter seems to work OK in place of the shortening, with a bit of heating to soften it up. In a 1-pound package with 4 sticks, 1 stick is about 1/2 cup. Lard should be an even better substitute.