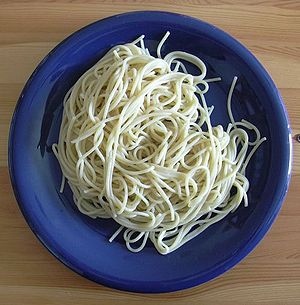 Wikipedia Article About Spaghetti on Wikipedia

Spaghetti is a long, thin form of pasta. It is versatile, popular, and available throughout the Western world.

Spaghetti is the plural form of the Italian word spaghetto, which is a diminutive of "spago," meaning "string," or "twine." The word "spaghetti" can be literally translated as "little strings." According to some, it is an uncountable noun in English. With uncountable nouns there is no simple singular. However the Oxford English Dictionary currently still gives the singular as spaghetto for English speaking users.