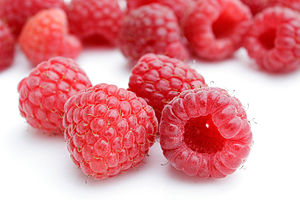 Raspberries are sweet, small red berries with a delicate flavor and a tender texture. They are at their peak of season during the summer. Select unbruised, slightly soft berries with a deep color and an inviting fragrance.

WA plant that is also called Red raspberry, the raspberry comes from Rubus idaeus and it produces a sweet red fruit in late summer or early autumn. In fact it represents an aggregate fruit of numerous drupelets around a central core. Usually raspberries grow in forests and fields, especially where fire or wood-cutting has produced open space. The flowers of this plant are a real source of nectar for honeybees. Being cultivated in moist temperate regions, it grows easily and tends to spread if it is not cut back. Raspberry leaves can be used fresh or dried in diferent herbal and medicinal teas. They have an astringent flavour. Raspberries contain xylitol that is a sugar alcohol artificial sweetener which has great effects in preventing and even repairing tooth decay. Raspberries need a lot of sun and water in order to develop beautifully. There are lots of raspberry species, such as Arctic raspberry, lowering raspberry, black raspberry, whitebark raspberry, and wine raspberry. Given the new technology and the varieties and innovations, raspberries can be eaten at any time, not only on late summer.