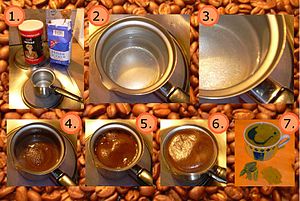 As with other ways of preparing coffee, the best Turkish coffee is made from freshly roasted beans ground just before brewing. A dark roast is preferable but even a medium roast coffee will yield a strong aroma and flavour. The grinding is done either by pounding in a mortar (the original method) or using a mill (the more usual method today), and the end result is a fine coffee powder. Beans for Turkish coffee are ground even finer than the grind used in pump-driven espresso makers; therefore, Turkish coffee should be powdery. It is the finest grind of coffee used in any style of coffee making.

For best results, the water must be cold. The amount of water necessary can be measured using the cups. The coffee and the sugar are usually added to water, rather than being put into the pot first. For each cup, between one and two heaped teaspoons of coffee are used. In Turkey, four degrees of sweetness are used. The Turkish terms and approximate amounts are as follows: sade (plain; no sugar), az şekerli (little sugar; half a levelled teaspoon of sugar), orta şekerli (medium sugar; one levelled teaspoon), and çok şekerli (a lot of sugar; one and a half or two levelled teaspoons). The coffee and the desired amount of sugar are stirred until all coffee sinks and the sugar is dissolved. Following this, the spoon is removed and the pot is put on the fire. No stirring is done beyond this point, as it would dissolve the foam. Just as the coffee begins boiling, the pot is removed from the fire and the coffee is poured into the cups.

In Egypt, answering that you'd like it "sade" (ساده plain; no sugar, a loanword from Turkish/Persian) is completely fine, as it is interesting to also note that "sade" is the only kind of coffee allowed for mourning people who abstain from "pleasurable" sweetness). 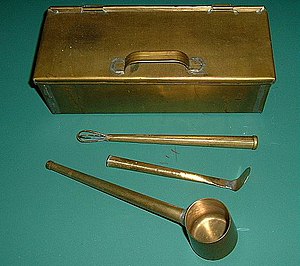 A well-prepared Turkish coffee has a thick foam at the top (köpük in Turkish), is homogeneous, and does not contain noticeable particles in the foam or the liquid. This can be achieved only if cold water and a low heat are used. Starting with warm water or a strong heat does not leave enough time for either the coffee to sink or the foam to form. It is possible to wait an additional twenty seconds past boiling, which makes a homogeneous and delicious coffee, but the foam is completely lost. To overcome this, foam can be removed and put into cups earlier and the rest can be left to boil. In this case special attention must be paid to transfer only the foam and not the suspended particles.

There are other schools of preparing Turkish coffee that vary from the above. One such method involves starting with hot water alone, then adding and dissolving the sugar. The product is in essence a sugar syrup with a higher boiling point than water. The coffee and cardamom are added, and the mixture is stirred. It is then brought to a boil and just before serving is removed from the heat for a few seconds and returned to it, being brought to a brief boil a second time. This double (and sometimes triple) boiling is an essential part of the process, both ceremonially and — as connoisseurs claim — for the palate.

A common variation in the Arab world is allowing the brew to boil, the pot removed from the heat source just before it boils over, allowing it to settle, and then repeating the process two or three times. This results in even stronger and more concentrated coffee.