Here's your guide to cooking the perfect Bacone -- a luscious cone of curled bacon, filled with a delicious mix of scrambled eggs, cheese, and hash browns, topped with proper country gravy and a warm biscuit. 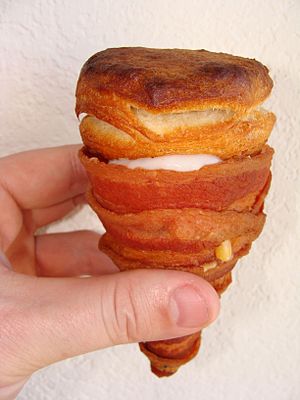 This dish debuted at Bacon Camp 2009, and appeared as a special segment on foodnetwork.com for their show What Would Brian Boitano Make?. The Bacone was invented by Christian Williams of Wikia, and the segment with Christian showing Brian Boitano how to make a Bacone was filmed at Wikia co-founder Jimmy Wales' apartment in San Francisco.

Here's what you'll need to really do the bacone justice:

I created the bacone forms by cutting up a strainer and rolling them into cone shapes and stapling them. One cone is smaller than the other. The bacon is sandwiched between the two forms when frying.

Through trial and error, I learned that when the bacon is fried, it really, really likes to stick to the inner form. Once it's stuck, there's no getting it off.

The only way to ensure that the bacone is able to be removed from the inner form is to wrap it with aluminum foil.

I'm no expert, and there may be better bacon to use, but I found that the thicker the bacon, the better the bacone. Thin bacon seemed to really shrivel up in the fryer, which led to a paper-thin shot glass-sized cone. Just use the thick stuff.

I start at the bottom and wrap upward. The first strip goes around the mouth of the cone and doesn't have much overlap with itself. |}

Wrap a second strip of bacon on the form, overlapping with the first.

Keep wrapping. When you're done, the Bacone should look something like this. As you get toward the top, the successive rings of bacon will start to hang away from the form. When this happens, I twist the bacon 180 degrees and make a fold in the bacon. Once you try it, you'll see what I mean. Just ensure that you keep the bacon as tight against the form as possible.

When you've completed wrapping the Bacone, put the outer form on top of the Bacone to prepare for frying.

I put my fryer on the maximum setting (400 degrees) and fry the Bacone for a few minutes. Bacon doesn't seem to spatter that much in the fryer, so you can open the lid and roll the Bacone around with a knife to ensure even cooking. Most of the time, though, I have the lid closed.

When the frying is done, pull it out of the fryer with a knife or whatever you have handy. The bacon will have shrunk a bit.

Pull the outer form off of the Bacone and allow to dry for a bit.

Peel the foil back from the inner form and use a Leatherman to extract the form. This might be tough and you might burn your fingers, but you're only moments away from enjoying a Bacone. Don't forget that! (Note the Leatherman in action in this shot!)

Twist the aluminum into a tight cone of its own and pull it to unlodge it from the Bacone.

This is what a Bacone looks like when it is finished.

Preparing and Serving the Bacone[edit]

Fill the Bacone with a mixture of scrambled eggs, hash browns, and cheese (I use colby jack). Fill the Bacone until almost full and add a layer of country gravy. Atop the gravy, add a biscuit. Just a little warning, and I'm serious here, the first bite is pure heaven.

From Melissa and Christian, enjoy!